Most musicians who know their mics, probably consider Shure Microphones Shure SM58 a staple in their arsenal for a ton of reasons.  Well, for one, it’s the world’s most popular live vocal mic.  It’s not just cause it’s pretty, even though you’ve probably seen it being used by a bunch of famous artists whenever you watch a concert on your TV or up front and sweaty close.  This mic is everywhere for a reason.

Now, as you may notice from our writings on the stuff we own, we aren’t exactly gearheads, but we do love the instruments we’ve got and we’re pretty passionate about them.  This mic has been with us from the very beginning of the band…actually this mic has probably been here since we were pubescent teens just learning to sing and play our instruments.  BTW, we have A LOT of mics…not sure exactly where they all came from.

It’s not exactly the most interesting thing in the world to write about microphones, cause really, we get more excited when we get to tinker with other musical toys, and create outer spacey sounds.  But part of the spacey weird sounds we like to create, DO in fact come from the microphones we use…well, adding effects to the vocals that we sing INTO the mics anyway.

The big plus about shure microphones shure sm58 that makes it super special to us, is that’s the fact that it doesn’t bleed, even when we’ve got a hell of a lot of noise going in the practice space.  As mentioned earlier, we’ve got a whole lot of mics.  There was a period of time when every practice was so damn annoying because if we got a little too loud, or if I got a little too close to the microphone, we’d start to hear horrible feedback in the practice space coming from the monitors.

For a while, we didn’t realize exactly why this was happening.  A song like Let’s Make Noise, from our first record – is LOUD…and we’d be practicing it, and just certain parts when I’d get a certain distance to the microphone, the feedback would just go insane, and this would happen with a lot of songs…so we couldn’t even get through a practice without a ton of frustration, constantly trying to tweak the EQ of the instruments…all we knew is it was annoying and we wanted it to stop…again, we’re not gearheads, so trying to figure out music related tech problems is a pain in the butt…but we’ve learned, cause we had no option BUT to figure out techy type stuff after we stopped working with our producer/engineer.

And, as mentioned earlier, we have a whole bunch of microphones…literally just swapping out one mic with the Shure SM58 made all the difference in the world.  We don’t fully understand its construction, but somehow, its design doesn’t allow crazy frequencies get in the way or cause terrible feedback.  It’s just a solid mic that works, and sort of works in a similar vain as the Mic Mechanic, in the sense that it’s simple, powerful, rugged, and just does exactly what it should do, with very little maintenance…that’s pretty much all we want.  We’re songwriters, not music gear whores.  We prefer spending our time in the creative process, and creating musical stuff…well, not stuff, but musical marshmallows of sound that we call music.

Of all the microphones we have, the shure sm58 is the most versatile – it’s one we can knock around, spill beer on, take with us if we’re gonna play a party, and actually works well to record with too.  It’s the rock star of microphones, kind of like our microKORG is the rock star of keyboards – whenever we go to see a band perform live who actually uses a synth, one of the band members always pulls out that microKORG synth vocorder.  Same goes for this mic – go to any music venue, or any recording studio, and you’ll see it there, just sitting around proudly, knowing that it belongs to the royal family of mics. 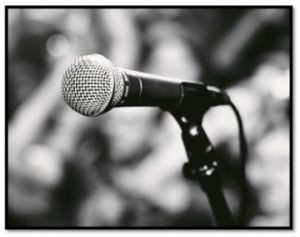 There’s really nothing incredibly fancy about this microphone – it just works, it’s powerful as all hell, rugged, and very good quality.  Like I said, I’ve probably had it since I was a tween, and still using it today…and what I didn’t know back then is how long lasting and powerful of a mic it actually was…and I had no idea it was a staple for pretty much all professional musicians of all musical styles, from stadium superstar stages to small church bands.

And if you’re ever going away for a weekend to an isolated cottage with your laptop and recording gear, you could get away with recording every single instrument, and vocals, using just this mic, and you could come out with a great quality recording.

There’s not much else to say about this microphone.  As I said earlier – nothing all that exciting about writing about a contraption you sing into…but at the same time, it’s one of the most essential pieces of gear any musician can own.

Thanks much for reading!  If you’ve got any questions, comments, complaints, or just wanna say howdy, just leave them below an we’ll make sure to get back to you!  If you enjoy what you’re reading, please join our mailing list to get updates on new music, videos, and life.  You’ll receive a few free songs and an exclusive movie download instantly too.  Sign up here.  Thanks!