I’ve never been in a serious accident in my life until a little less than two weeks ago.  I guess it wasn’t too serious (well actually it was) but I remember thinking to myself while they were operating on me in the hospital how one minute you can be totally fine, and 10 minutes later you might just be surrounded by doctors preparing to sew 34 stitches into your lower back for a “stab wound”.  No, I wasn’t actually stabbed but that’s the status they told me it falls under.  In fact, they kept asking me “how did this happen?” and I honestly didn’t know.

Well, let me back up a little bit here.  It was two nights before our Empty Bottle gig (which was a ton of fun BTW and thanks to those of you who came out to support our first show in over 6 months…if I wasn’t moving around too much on stage, you’ll soon know why).  So, we spent the night rehearsing the new songs and preparing for the show.  I wish I could remember the exact order of events here…it must have been around 11:30pm when we finished practicing…Ivan and I were having a conversation and I just remember walking into the room and feeling something sharp rub up against my back, and I jumped onto his futon.  Then I touched my back with my hand and there was blood all over my fingers.  Guess what I did next?  I started to FREAK OUT!  And when I told Ivan “I think I need to go to the hospital”, he took a look at my back and he REALLY started freaking out.  I  knew right at that moment that this was bad.  Ivan started scurrying around to get a jacket, my puppy Truman was running in circles barking like a nut and obviously scared; he hadn’t seen this kind of insanity before; Ivan gave me a towel to wrap around my back.  I could see blood just gushing onto the floor.  Luckily I wasn’t in much pain (possibly from the few tequila shots I had earlier in the night?), but the amount of blood coming out of my body was grossing me out and scaring me at the same time.  We still had no idea what it was that could have caused something like this, but it didn’t matter right then.

So we jumped in the van; Ivan drove me to Saint Mary’s Hospital and we went directly to the emergency room; I was still wrapped in this towel which I’m certain will never be used again.  Luckily this hospital is just a few blocks from my place so we got there probably 10 minutes after this bloody mess happened.  Now, I can understand Ivan freaking out at whatever the hell my back must have looked like, but seeing the faces of the hospital staff didn’t exactly comfort me either.  They all just asked the same question, “how did this happen?”  I don’t know how this happened but I’m going to find out as SOON as I get back home.  At that moment I was thinking that maybe Ivan had some sharp/pointy object on his futon, like a knife or scissors or something and that I possibly cut myself when I jumped onto it. 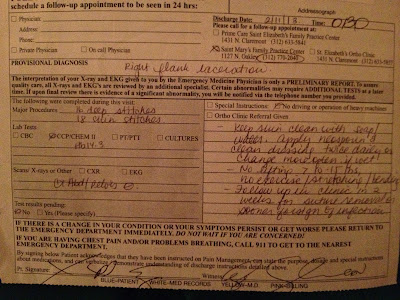 So they take me to an operating table and start pouring water over this “wound” to clean it and keep it from getting infected; I asked, “how bad could this possibly be?” and one nurse just said “You know how when you open a biology book and see a really horrific open wound?  That’s what this looks like.  It’s really bad and it’s about 5 inches long”  I guess that’s all I needed to know.  From that point on, they numbed me with several injections and immediately started sewing me back together.  The nurse said I would be getting a minimum of 30 stitches and also a CAT Scan because this wound was so deep, it would require additional X-rays to ensure my kidneys or lungs weren’t also hurt in any way.  In fact, the wound was deep enough to be labeled “stab wound”.  Luckily, the CAT Scan results turned out to be fine; I ended up getting 34 stitches – 16 deep stitches and 18 skin stitches.  Well, after two hours of being at the hospital, I was sewed back together and ready to go home and rest (and take painkillers of course, but honestly, I never felt much pain in the first place – I’m guessing because of the location of the wound). 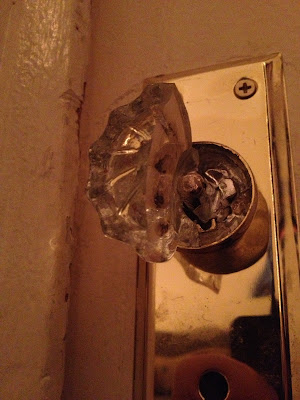 So, if you’ve read this far, you’re probably interested in knowing what it was that caused all this.  Ivan searched and searched until he found out exactly what was responsible for this 5 inch gash in my lower back.  The doorknob of the room where this happened is made of glass and it was broken into an awkward and sharp looking piece; there was an obvious bloodstain on the sharp pointed corner of it and it’s at the same height that my stitches are at if I’m standing up, so the mystery was solved.  I must have rubbed up heavily against this sharp corner of the broken doorknob when I walked into that room earlier.  Ivan found the other half of it on the floor.  When and how did this doorknob even break?  That’s a good question.  It’s amazing that something we use every day is capable of causing a ‘stab wound’ and most likely a permanent scar.  But I’m feeling okay and the stitches will be taken out this coming Monday.  I’m hoping it’s not infected in any way.  I’ve been cleaning it and putting Neosporin on it each day. Anyhow, that’s the story of the week 🙂  I know it’s not very music related for a band blog, but hey, the incident did happen right next to our practice space…and on that note, it’s time to get back to recording.