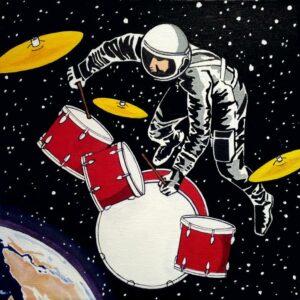 Since I was a little kid, I always had a natural inclination for rhythm. I remember taking my mom’s knitting needles and pretending they were drumsticks. I played drums on chairs, tables, and any other object that produced any kind of comparable sound of a real drum. Many years passed before I could finally convince my family to get me a real drum set for Christmas, which, by the way turned out to be very similar to John Bonham drums that he played.

Since they couldn’t afford to get me a brand new drum kit, they got me a used one. And honestly, I didn’t care. I just wanted a real drum set.  We saw different ads in the local newspapers that we marked as being potential candidates.  The first offer was from a family of well-off people.  We didn’t know anything about brands or quality, but they helped by giving us details about the drums they had.  I can’t explain what I was feeling in that moment.  It was an inexplicable feeling of anxiety, sort of like the first time you feel the sensation of love.

So, we finally arrived at our destination, and the vendors showed me what I had been searching for, for years. At the time, I didn’t really even know what it was that I was looking for exactly. I was like a child who would happily accept any toy given to me. And there it was, waiting for me and I was waiting for her. 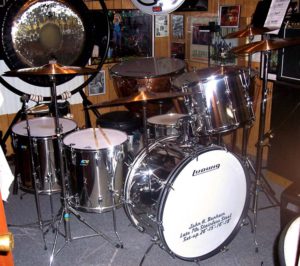 “It’s an acrylic Ludwig” commented the original owner and I answered in my mind, “I don’t care what it is. I love it!” When my family asked about the price, it was about the equivalent of $400 at the time.  My family frowned, and I was sweating, afraid that they were going to respond with a resounding “NO!”  But they asked me, “do you like it?” “Yes!” I said, as a chill ran down my spine.  My family told me, “we have other options we can go look at.”  I would have been happy ending our search right there. I wished all the Gods of the universe would send a signal telling them that we should get THIS drum kit.

And then magically (apparently God was listening), the owner of the drum kit offered us a discount if we decided to get this drum set.  So, my family accepted their offer.  I felt my heart beating inside of my chest.  My family closed the deal and we arranged to pack up the drum kit and put it in the car. It was an incredibly happy night. We arrived back home and and decided to set up the drum kit.  But where?  Definitely in my room. But it was already late, and the day was filled with so many intense emotions, so I went to bed. 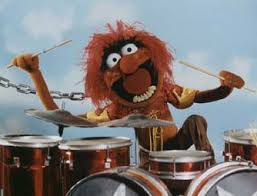 In the early hours of the morning, I opened my eyes thinking it was all just a dream.  But there it was – my first drum kit!  I jumped out of bed like a kid on Christmas morning, so impatient to open up his gifts. In this case, of course, I already knew what my gift was.  But still, it was a mystery, because the next step was to learn how to play a real drum kit!

I set up everything in its right place very carefully, just like when my mom would prepare to go out to drive her car.  She would check to make sure she didn’t forget anything before she left.  Similarly, I paid very close attention to all the details and I spent time setting up everything carefully.

Then finally, the moment arrived.  It was the moment I started to actually play my very first rhythms.  The noise was so intense that only a few moments later, my mom came knocking on my door shouting, “are you crazy?  Why on earth did you want that crap!?” That’s when I realized a big problem.  The problem was not having waited so many years to get a real drum kit.  The problem would be in the years to come. 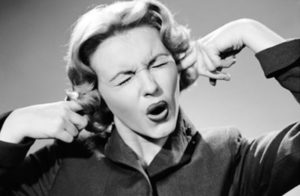 From that day on, my mother made my life impossible. I begged God for her to leave the house for any reason, because it was impossible to play the drum kit without her starting to scream. I had to manage them by placing towels over the drums, but it definitely was not the same. I wanted to leave my house and live somewhere else where I could play drums every day and no one would tell me anything!  But how on earth could I do that?  I didn’t have an answer to that so I just took refuge in my own thoughts and dreams of freedom.  I forgot about all my troubles when my mom wasn’t there, and I played like a real drummer.

I remember the first song I started playing was “Sale El Sol” by Soda Stereo. And after that, I started learning more songs by the same band. I knew I had a talent but I didn’t know how to prove it. So, one day, I looked in the classifieds section of the newspapers for drummer auditions. Without any experience, I dared to call one of the phone numbers and we set up a time to chat. The name and story of this band will be something to discuss at another time. 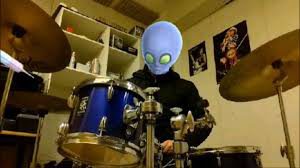 So, the day of our appointment arrived.  Interestingly, I wasn’t nervous at all, after being asked questions such as what were my expectations as a drummer and what my experience was.  I’ll be honest though.  I lied and told them that I had played with a band before and that we were writing original songs!  It really surprised them when I said we played “original” tunes. They told me they were not a band that played original tunes. They only played covers. They especially played covers from the 50’s and 60’s and I told them it would be my pleasure to try.  They noticed my enthusiasm and gave me a song list including Chuck Berry, Elvis Presley, Jerry Lee Lewis, the Beatles, Rolling Stones, and Santana.

After a week of listening to the songs and the pressure of not touching the drum kit while my mom was there, I memorized each song in detail.  I must say that memorizing the song details without actually playing the songs created a very special spark when it came to physically playing the songs during practice.  But again, that will be a story for another time too.

Finally, the day to practice with this band arrived, and I didn’t have to move my instruments.  The members of the band decided to come to my house.  I had to practically get on my knees and beg my mom to allow us to rehearse on patio one Saturday night. That’s when people go to bed late anyway.  When the band members arrived and saw that I had my drum kit already assembled on the patio, they said “wow, it’s John Bonham!”  I didn’t know who he was and I asked him, “who is that?”  They told me it was Led Zeppelin’s drummer. 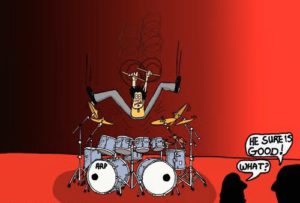 After about two or three hours of practice, they were delighted with my performance and officially welcomed me into the band as their drummer.  After that session, there were many more, but I started to have some doubts.  Now that I knew who John Bonham was, I did some investigating with my friends to find their songs.  I realized that my drum kit was very similar to his.  It was the same material, but different drum sizes.  I don’t know if this was subconscious or not.  Maybe it was fate, but it was very soon after this that Led Zeppelin became a huge influence in my life, and especially John Bonham.  To this day, I consider him to be the best drummer of all time. But that’s a story for another time.