Sometimes I look at my guitar hanging on the wall, and I get a little upset. I’ve got like 13 guitars, but I’m talking about my Guild guitar.  My baby that I’ve had since I was 17.

We don’t hang out the way we used to. I think to myself, ‘have you changed or have I changed?” I’m definitely the one who’s changed. I’m having fun trying new things, experimenting with beats and keyboard sounds these days (thanks to Ivan’s influence btw).

But there was a time in my life, that lasted many years, when this Guild guitar wouldn’t leave my side. I was Atreyu, from The Neverending Story, on a mission to save Fantasia with music.

When you’re 17, you hang out in your friends’ basements doing things you probably shouldn’t be doing. Well, during those naughty times, my guitar was there. We’d walk down the street to the pond late Saturday nights to hang out. My guitar came with. It didn’t matter if it was broad daylight, or past midnight. The guitar was there. There’d be a group of us on the patio drinking, and my fingers would be plucking strings, coming up with ideas for songs.

Home life was no different. From the minute I got home from school, to the moment I went to bed (aside from eating dinner), I was jammin’ the guitar. I’d listen to rock songs over and over and over again until I figured out how to play them. The Eagles Hotel California, Metallica’s Nothing Else Matters, Smashing Pumpkins Today…then I’d record my performances, and take the recordings to school and make people listen to my terrible singing and playing.

Music became a way to capture my insecurities and vulnerabilities. I was one hell of a confused teenager who was also an outcast, and on top of that, my parents hated each other and were totally repressed about it. My brother was kicked out of multiple high schools for drugs, and my upbringing was total chaos. Things were broken regularly, and psychotic screaming was a daily thing that neighbors could all hear.

My only escape was this guitar I had. There came this moment when the world magically froze…I knew music was all I’d ever need. I was writing this finger picking ballad song, and I was so sad, lonely, and feeling lost, but somehow I was able to capture all these emotions in the music. These were feelings I’d be too afraid to share with anyone…but I captured them all into a song. And it hit me like a ton of bricks. Holy shit, music is a place I can hide all my demons and not be ashamed of it. 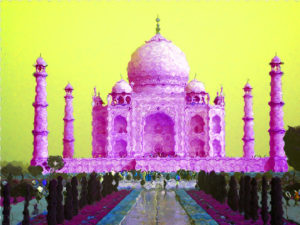 I’ll never forget the transformative experience of going to India with my dad to visit his side of the family. I started writing a song on that guitar the day before we left. I thought I’d invented a new tuning that no one had ever done (only to find out later that lots of bands have already done that), and I spent the entire trip writing this song called Trip 22, a 10 minute mind warp of music, inspired by the intense experiences of this journey through a third world country. That song took me almost a full year to put all the pieces together. To this day, if I play it, it transports me to another dimension. And writing that song marked a whole new change musically.   It made me realize that music could go into creative depths in directions I didn’t even know were possible.

So, songwriting only became more and more of an obsession, and the guitar was my vehicle for everything. When it was time to go to college (which I cheated on my state exams to get into), I was freaking out, cause all I wanted to do was make music. I had no interest in an education, but off my parents sent me, to U of I, the cornfield college town of America.

I’d sit in my dorm room writing and recording ideas all the time. When I went to class, I was coming up with music in my head. I started a band with my best friend down the hall whose obsession was Green Day and Blink 182. We met up with Paul, a bassist (who looked like Waldo from Where’s Waldo), and a guy named Justin who jumped on drums (and I fed his weed plants when he traveled to California), and we practiced in one of the dorm basement rooms.

Time flew by, and the next thing I knew, college was over. I was so friggin’ depressed about graduating, cause those four years were so surreal. College life is like living in a dream. So, heading back to live at my parents just sucked. Eventually I had to get a job.

So, off to the real world I went. I still wrote music like crazy, but I’ll say something…when you’ve got a passion that makes your heart beat, you’d do anything to keep that alive, right? Well, in my experience, the real world is a slow killer of dreams. Thank God I realized it before it was too late and I escaped.

My relationship with my Guild guitar has changed. That much is true. It’s not like when we first dive into a relationship and all we want is to be with that person all the time. It’s all we can think about. We’re all smitten as kittens. Well, music is very similar in my experience. 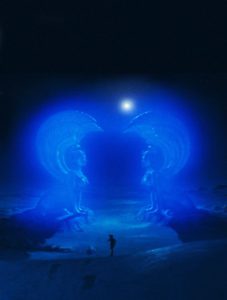 I miss that desire to have my Guild guitar next to me all the time. But love doesn’t live on in the exact same way forever. It changes, even with inanimate objects. I’m still Atreyu too (Neverending Story nerd here, ok?), but Fantasia has sort of frozen over, and I’m trying to come up with potions in my laboratory to unfreeze it and bring that once beautiful world back to life.

I’ve moved on to so many new instruments, and I’ve been discovering new sounds, and trying new things. Our ears change, and the things I want to hear in music has changed. Thank God for Ivan actually, cause he is never happy to settle making the same music today that we wrote even 6 months ago. He always makes sure to keep things thriving with us.

My Guild has broken at the neck 3 separate times. I’ve spent more money fixing it up than the actual price of the guitar. Thank God it’s stayed together for a while now. It’s still my baby, and I still take it down to play it. It’s beat up, and got scars from all the years of beating it up, which is awesome and a reminder of how powerful true love can be. And it still plays as beautifully as it ever did.

4 thoughts on “My Guild Guitar – My First Love”